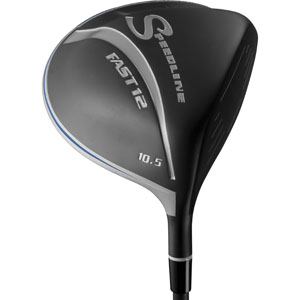 Hi everyone, thanks for stopping by.  today we have an independent review of the Adams Speedline F12.  Enjoy!

Adams Golf may lack the cache of the game’s superstar brands, but the company occupies a special spot of its own: inside Yani Tseng’s bag. The world’s No. 1 female golfer plays Adams irons, fairway woods and hybrids, and tees off with a model from the company’s Speedline driver lineup (the 9032).

I recently tested one of the Adams family’s newest members, the Speedline Fast 12 driver, and while my results were no match for Yani’s, they weren’t half bad.

At 460cc, the Speedline Fast 12 maxes out on clubhead volume and features what the company calls “airfoil design elements” to enhance aerodynamics. Adams claims a 14% reduction in drag delivering up to 3 MPH in additional clubhead speed.

Viewed from the bottom, the Speedline Fast 12 is indeed an aerodynamic wonder. In fact, the toe of its curvy sole resembles a UFO of 1950s drive-in movie vintage. The driver sports a more traditional look when placed in playing position, with a comforting pear-like shape and muted gray finish. There’s no alignment guide on top, while three curved incisions near the trailing edge – the aforementioned airfoil design elements – provide a sense of balance.  The club head is a muted grey, which take it or leave it, reminds me of a ladies driver.

A couple of qualifying factors from this test: 1. Shots were hit with a strong tailwind (20 MPH plus) coming slightly from the right. 2. I normally play a 43-inch driver, so this 46-inch version was a little long for me. Getting used to the longer shaft was difficult.

I tend to hit the ball pretty low with the driver, and that held true with the Adams Speedline. However, contact above the center of the clubface produced the desired high launch and good down-range carry (no doubt aided by the wind). The low-flying efforts sailed with good penetration in general, although some ballooning occurred on fades. Distance appeared to compare favorably with the higher-launching Cobra AMP, tested the same day.

At impact, the sound and feel were a bit clangy for my taste, but similar to many drivers on the market. Someday I’ll get used to that sensation, which reminds me of a frying pan hitting a golf ball, but for now it still jangles my nerves.

The Speedline Fast 12 retails at $299.99 for both the standard and draw models. That’s comparable to prices for new models from Cobra, Nike and others, and about $100 less than you’ll pay for the latest and greatest by the likes of Titleist and TaylorMade. The performance is about what you’d expect at that price, though the lack of shaft options is a Speedline drawback.

The Speedline driver features 46″ shaft – which is a little longer than the more normal 44.5″.  While this length will add to increased speed, it can also cause some swing problems for many players as it takes some getting used to.  Adams was able to make the club more aerodynamic and forgiving by building this driver in a non-traditional shape… so kudos for that.  Overall, this driver is quite similar to the 9088UL.  While the model I hit did not have any adjustability, the LS (Low Spin) version does, which will benefit better players.