Who would have thought it would come to this. The game of golf, wrapped in tradition and history, has started to falter, stumble and fade away. Golf courses are closing their doors, golf club manufacturers are filing for bankruptcy, membership sales are down, and tee-sheets are looking scarce. What is the future of our beloved game? Is there any hope?

The number of golfers is down about 9% (2.7m) over the past five years.

These numbers are based on a 2009 study.

What does this all mean?

Golf is a dying game. Even Tiger and all he brought to the game was not enough to help improve these numbers during the past five years. Now that he’s out of the spotlight, is there any hope? Is a single player even able to re-engage the public?

In my opinion, there’s one detrimental factor that’s killing the game of golf. It’s not Tiger Woods being out of the spotlight, the economic recession, or the lack of personality on Tour – it’s simply that golf courses don’t understand supply and demand.

Golf is no longer for the masses; rather than looking to the future, golf has taken a step backwards, and once again become elitist. Year after year, we’ve seen this ritual of green fees going up 2-10% at most clubs. Membership rates are in the same boat. Private club shares are increasing and now some super-exclusive require $100K+ shares just to become a member. How can rates keep skyrocketing while the demand is going down?

Golf Club Manufacturers are trying real hard to find new revenue sources. Prices for golf equipment over the past few years have remained relatively stable if not gone down. Still many companies like Callaway are suffering, and smaller manufacturers like Yes! Golf had to shut their doors. Their traditional stance on equipment has not enough to attract new customers to the game. 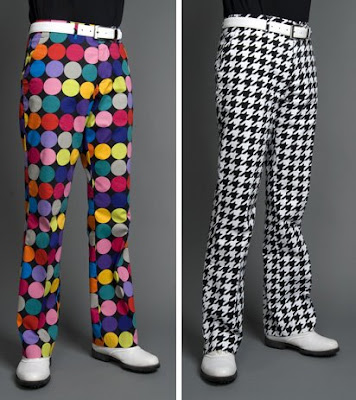 So what’s the answer? Lately, there’s been a fundamental shift in the way golf equipment is being marketed to the public. Golf club manufacturers like Cobra, TaylorMade, Whitlam, Scotty Cameron, True Linkswear, LoudMouth Golf, Vibrant Golf, J Lindeberg and many more are moving away from the “tradition” of marketing to baby boomers and instead going after a younger crowd.

Over the past few years, these manufacturers have started to market their products to a much younger demographic to help get new players interested in the game and balance their financial reports. This is why we’ve seen the “white-driver” trend, the colorful clothing, re-invented golf shoes, and bright, colorful golf clubs – it’s all an attention grab for younger golfers.

It may piss off the baby boomers, but this is necessary shift to help ensure golf’s survival. Traditional golf clothing and values will slowly kill the game – we need to be open to change. But even with this change, it may not be enough.  If golf courses continue to increase their rates year after year, they will ultimately alienate new players from joining the game.

It’s time to re-think the game we all love, before it’s gone. So the next time you want to scold that junior golfer who is playing in a loud, colorful un-tucked golf shirt and bright shorts with flip-flops on, you may just want hold your tongue – they may just be golf’s salvation.